We saw this article about a community ending a food desert by opening their own grocery store and we knew it was a must share.

A decade ago, there were more than 50 liquor stores in West Oakland and zero full-service grocery stores. But in 2009, community members launched Mandela Foods Cooperative, a health food store in the neighborhood with a small but Whole Foods-like produce section.

Despite the high failure rates of new businesses–around 70% fail after 10 years–the store has survived. This year, it will expand into a new retail space more than twice as large. 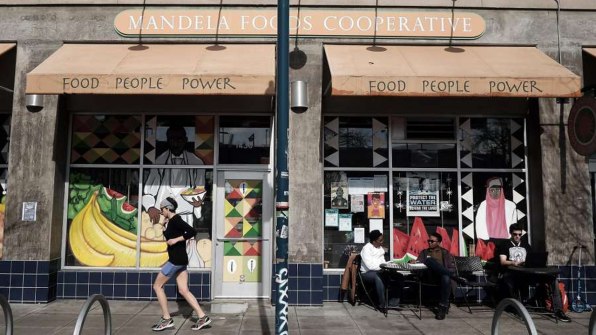 “Mandela Foods came about really from a community push to begin to address the issues of food insecurity and economic disparities in West Oakland,” says Dana Harvey, executive director of Mandela Marketplace, a nonprofit that launched shortly after the worker-owned grocery store to help support it and other food-focused, community-driven initiatives in the area.

Harvey and other activists helped lead the creation of the store. “One of the solutions the community identified that would be important is that they should own their own grocery store.”

Have you seen any other articles about a communiy ending a food desert or have ideas? Leave us a comment and let us know.

Here are 10 Facts About Food Desserts from our friends at DoSomething.org:

1 – “Food deserts” are geographic areas where access to affordable, healthy food options are limited or nonexistent because grocery stores are too far away.

2 – About 23.5 million people live in food deserts. Nearly half of them are also low-income.

3 – Approximately 2.3 million people (2.2% of all US households) live in low-income, rural areas that are more than 10 miles from a supermarket.

4 – Food deserts may be under-reported because the North American Industry Classification System places small corner grocery stores. These are sometimes placed in the same category as grocery stores like Safeway and Whole Foods.

5 – Residents living in food deserts also have a hard time finding foods that are culturally relevant and that meet their dietary restrictions.

6 – There is a $400 million investment from the government towards this initiative. This will go towards providing tax breaks for supermarkets that open in food deserts.

7 – You can find food deserts near you with the USDA’s new food desert locator map.

8 – People living in the poorest SES (social-economic status) areas have 2.5 times the exposure to fast-food restaurants as those living in the wealthiest areas.

9 – With limited options, many people living in food deserts get meals from fast-food restaurants.

10 – Food insecurity has a high correlation with increased diabetes rates.